Windmills are iconic to the island of Mykonos – and an amazing place for photo opps. The best times to go to avoid the crowds are early in the morning – whether you woke up bright and early or you still haven’t gone to bed yet.

One of the most popular times is usually during sunset. The bright, warm colors of the sun contrasted with the windmills is breathtaking.

Walk all the way down the hill until you hit Little Venice for the one of the best views of the sunset. The further down you go, the better. 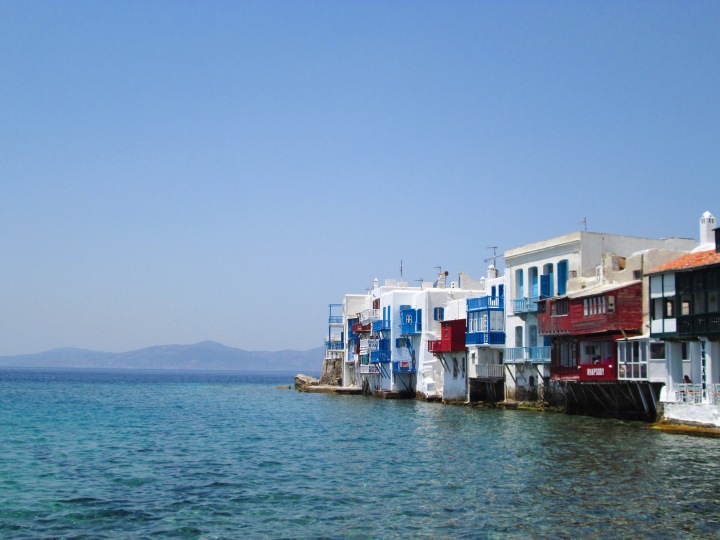 FUN FACT: This part of the island was frequently raided by pirates. In honor of one of the legendary pirates turned Robin Hood, there is a new bar in Little Venice – Bao’s Bar.

Bao was an unconventional pirate protector who was awarded the tiny island floating next to Mykonos to be his home after he courageously fought against the Turks. He looted enemy ships and other pirates anchored between the two islands to protect Little Venice. A true legendary Mykonian bad ass. His tiny island was also named after him and a chapel of Saint George was built in his honor. Celebrate life and the fact that you’re in Mykonos and drink to pirate Bao. Don’t worry, they won’t make you walk the plank when you leave.

If you’re smart (you are), try to get to Bao’s, Caprice, or Galleraki ahead of time, they are the prime locations in Little Venice to see the sunset and sip delicious, tropical drinks.

True to the Cycladic architectural style, the houses and churches have white-washed facades and are scattered throughout the hills like a painting. No matter where you arrive in Mykonos, it will undoubtedly be the first thing you notice.

Chora (Mykonos Town), is a labyrinth of winding, white stoned streets and white storefronts alluring travelers for strolls at any time of day. There are hidden alleyways, stores and bars in every direction, so don’t be afraid or embarressed  to ask for directions, even locals get lost, especially at night after a few drinks.

One of my favorite parts about Chora is the contrasting effect the vibrant, brightly colored clothing, accessories and souvenirs have against the white paths and white walls. You should visit once during the day when the streets are lit up with the sun, and then again at night, when the paths are crowded with people eating, chatting and bar-hopping under the moonlight. 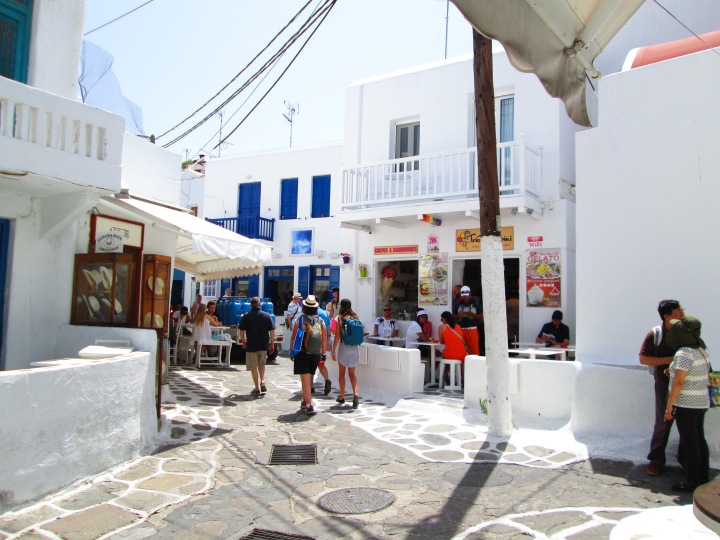 If you make it all the way through the labyrinth (congratulations!) you will most likely find yourself in the Old Port. Full of restaurants and shops, strolls along the waterfront feel like something out of a movie scene, not to mention the people watching is ahh-mazing.

This is also where you can catch the boat to Delos, an ancient spiritual island full of intense, magical energy. You have to experience it for yourself. If you’re curious, check out my Delos Destination page and Hippie Tomb Raider Vibes story from my Adventure Diary.

Last by not least – Go on an adventure to the often overlooked Armenistis Lighthouse. The lighthouse is part of the Aegean Maritime Museum located in a traditional Mykonian building in Chora dating back to the 19th century.  It is a fully functioning lighthouse and landmark on the island.

Located in “Fanari” which means” lantern” in Greek, the scenic coastal road offers panoramic and amazing views on the island.

FUN FACT: The lighthouse stands in the museum garden along with an number of marble gravestones of ancient sailors from the island of Delos and Mykonos. SpoOoky.