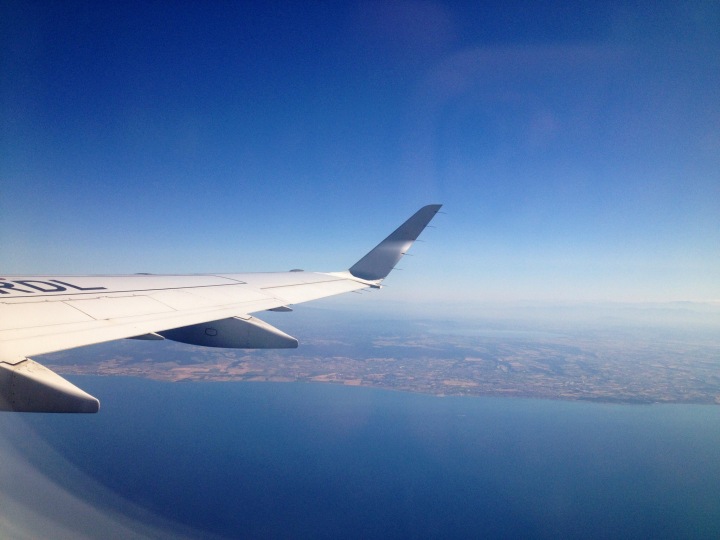 With more direct flights to Athens (from U.S.), there are more opportunities than ever to visit the ancient Greek capital and the islands. As a frequent traveller between New York and Athens,  I have found the routes on Swiss, Air France, United and Delta airlines to be great and relatively affordable.

A 8-9 hour direct flight, it can also be broken up into shorter legs allowing you to explore a European city before making it to Athens (think: NYC to Rome, Paris or Zurich and then a 2-3 hour flight from those cities to Athens).

1-2 days in Athens is the perfect amount of time to see the main sites, adjust to the time difference and fill your belly with fresh Greek salads and other native culinary specialties. That said, I find landing as early as possible in the morning is best. There is both a metro and nice commuter train that takes you directly from the airport and drops you into the heart of the city (where it’s cheaper to get a cab). Drop off your luggage, wake up with a freddo espresso, and then start exploring the city. This allows enough time for you to see at least 4 of the main attractions and then to jet off to the islands the following day.

Another option worth your time is to fly in during the evening, get a good nights sleep, and then wake up super early to explore the whole day. Depending on how much time you want to spend in Athens, you can take the first ferry to the islands the following morning.

I have taken both ferries and flights several times each way, and recommend either. How you get to the islands is entirely up to your schedule, mindset and budget. If you are not the most patient person and wish you could skip the travel part and just arrive at your destination – fly – you’ll be there in 25 minutes or 1-2 hours depending on the island. Aegean Airlines consistently wins best regional airline awards and offers multiple routes all over Greece. Only catch? That small hopper flight from Athens to Mykonos (or other island with an airport) can range from 90 to 200 euros. Yikes!

For my fellow bargain hunters -Ryan Air recently launched new routes that can get you to the island for cheaper. Keep in mind that luggage is usually not included in the price. For example, on my last flight in May, I paid 13 euro for the ticket, plus 35 euro for the bag, making the total just 48 EURO to get there in 20 minutes. Ah-mazing.

If the phrase, “it’s not getting there, but the journey that’s important” is more your style, take the ferry. Sit back, relax, order a coffee or drink, and watch the scenery. It will feel like you’re getting a sneak preview of other neighboring islands.

So, let’s talk ferries. There are two main ports leaving Athens: Piraeus and Rafina. Rafina is closer to the airport and can be reached via public bus (~8 euro) or taxi (~40 euro). If you’re in the city center, Piraeus is closer. Make sure to pay attention to where you are heading from (hotel or airport) and what time, as this will determine the best port for your departure.

In terms of the ferry companies, there is not a huge difference between the companies so don’t let that through you off. What matters is the timetables and availability of express ferries. The express ferries cost more (almost double the price) but are 100% worth it. I tend to take SeaJets, but again, pick whichever one works with your itinerary.

Tip: Book as far in advance as you can given you can miss a route or have to plan around a day if there isn’t a ferry that works well with your travel plans. I recommend using the below sites to browse the different ferries, routes and timetables:

Flight from Athens to Mykonos: ~20 minutes

Flight from Athens to Santorini: ~30-45 minutes

Ferry from Mykonos to Naxos: 30 minutes

Have a question or want help planning your route?  Feel free to shoot me an email – kerrylanded@gmail.com.